Note: this feature is available with [email protected] and higher.

Read the migration guide to learn how to enable it in older projects!

Create React App uses Jest as its test runner. To prepare for this integration, we did a major revamp of Jest so if you heard bad things about it years ago, give it another try.

Jest is a Node-based runner. This means that the tests always run in a Node environment and not in a real browser. This lets us enable fast iteration speed and prevent flakiness.

While Jest provides browser globals such as window thanks to jsdom, they are only approximations of the real browser behavior. Jest is intended to be used for unit tests of your logic and your components rather than the DOM quirks.

We recommend that you use a separate tool for browser end-to-end tests if you need them. They are beyond the scope of Create React App.

Jest will look for test files with any of the following popular naming conventions:

The .test.js / .spec.js files (or the __tests__ folders) can be located at any depth under the src top level folder.

We recommend to put the test files (or __tests__ folders) next to the code they are testing so that relative imports appear shorter. For example, if App.test.js and App.js are in the same folder, the test only needs to import App from './App' instead of a long relative path. Collocation also helps find tests more quickly in larger projects.

When you run npm test, Jest will launch in watch mode*. Every time you save a file, it will re-run the tests, like how npm start recompiles the code.

The watcher includes an interactive command-line interface with the ability to run all tests, or focus on a search pattern. It is designed this way so that you can keep it open and enjoy fast re-runs. You can learn the commands from the “Watch Usage” note that the watcher prints after every run:

*Although we recommend running your tests in watch mode during development, you can disable this behavior by passing in the --watchAll=false flag. In most CI environments, this is handled for you (see On CI servers).

By default, when you run npm test, Jest will only run the tests related to files changed since the last commit. This is an optimization designed to make your tests run fast regardless of how many tests you have. However it assumes that you don’t often commit the code that doesn’t pass the tests.

Jest will always explicitly mention that it only ran tests related to the files changed since the last commit. You can also press a in the watch mode to force Jest to run all tests.

Jest will always run all tests on a continuous integration server or if the project is not inside a Git or Mercurial repository.

To create tests, add it() (or test()) blocks with the name of the test and its code. You may optionally wrap them in describe() blocks for logical grouping but this is neither required nor recommended.

Jest provides a built-in expect() global function for making assertions. A basic test could look like this:

All expect() matchers supported by Jest are extensively documented here.

You can also use jest.fn() and expect(fn).toBeCalled() to create “spies” or mock functions.

Different projects choose different testing tradeoffs based on how often components change, and how much logic they contain. If you haven’t decided on a testing strategy yet, we recommend that you start with creating basic smoke tests for your components:

This test mounts a component and makes sure that it didn’t throw during rendering. Tests like this provide a lot of value with very little effort so they are great as a starting point, and this is the test you will find in src/App.test.js.

When you encounter bugs caused by changing components, you will gain a deeper insight into which parts of them are worth testing in your application. This might be a good time to introduce more specific tests asserting specific expected output or behavior.

Alternatively you may use yarn:

If you want to avoid boilerplate in your test files, you can create a src/setupTests.js file:

Here's an example of using react-testing-library and jest-dom for testing that the <App /> component renders "Learn React".

We recommend that you use expect() for assertions and jest.fn() for spies. If you are having issues with them please file those against Jest, and we’ll fix them. We intend to keep making them better for React, supporting, for example, pretty-printing React elements as JSX.

However, if you are used to other libraries, such as Chai and Sinon, or if you have existing code using them that you’d like to port over, you can import them normally like this:

and then use them in your tests like you normally do.

Note: this feature is available with [email protected] and higher.

Note: Keep in mind that if you decide to "eject" before creating src/setupTests.js, the resulting package.json file won't contain any reference to it, so you should manually create the property setupFilesAfterEnv in the configuration for Jest, something like the following:

You can replace it() with xit() to temporarily exclude a test from being executed.

Similarly, fit() lets you focus on a specific test without running any other tests.

Jest has an integrated coverage reporter that works well with ES6 and requires no configuration.

Run npm test -- --coverage (note extra -- in the middle) to include a coverage report like this:

Note that tests run much slower with coverage so it is recommended to run it separately from your normal workflow.

The default configuration that Create React App uses for Jest can be overridden by adding any of the following supported keys to a Jest config in your package.json.

By default npm test runs the watcher with interactive CLI. However, you can force it to run tests once and finish the process by setting an environment variable called CI.

When creating a build of your application with npm run build linter warnings are not checked by default. Like npm test, you can force the build to perform a linter warning check by setting the environment variable CI. If any warnings are encountered then the build fails.

Popular CI servers already set the environment variable CI by default but you can do this yourself too:

Follow this article to set up CircleCI with a Create React App project.

On your own environment​

(Note: the lack of whitespace is intentional.)

The test command will force Jest to run in CI-mode, and tests will only run once instead of launching the watcher.

The build command will check for linter warnings and fail if any are found.

If you know that none of your tests depend on jsdom, you can safely set --env=node, and your tests will run faster:

To help you make up your mind, here is a list of APIs that need jsdom:

In contrast, jsdom is not needed for the following APIs:

Finally, jsdom is also not needed for snapshot testing.

Snapshot testing is a feature of Jest that automatically generates text snapshots of your components and saves them on the disk so if the UI output changes, you get notified without manually writing any assertions on the component output. Read more about snapshot testing.

If you use Visual Studio Code, there is a Jest extension which works with Create React App out of the box. This provides a lot of IDE-like features while using a text editor: showing the status of a test run with potential fail messages inline, starting and stopping the watcher automatically, and offering one-click snapshot updates. 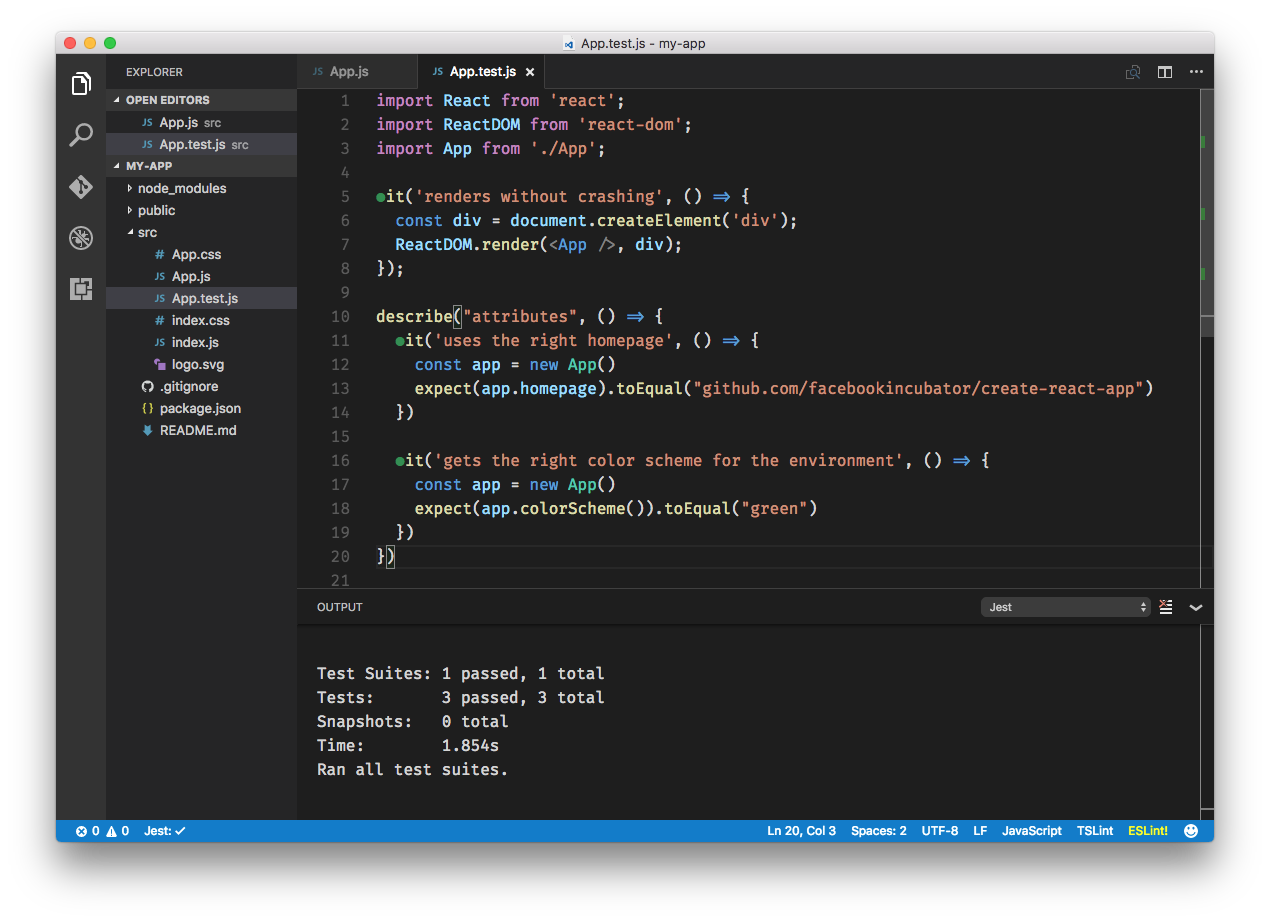